The O'Toole's took third place overall at the World's with Stephen Creighton's drum corp taking their fifth World Drumming Championship and also the RSPBA Champion of Champions Drumming title. Field Marshal Montgomery were declared 2018 World Pipe Band Champions after a day of overcast and sometimes rainy conditions at Glasgow Green against 11 other finalists in the Grade 1 competition - it was tyheir first major championship win of the 2018 season and the twelfth World Championship title for the band. The stands at the main arena were never completely full for the Grade 1 events, and often as much as half empty and only a handful of seats were occupied for the Grade 2 Final.

The final prizes in Grade 1 were announced after 8:30 pm.

The tunes played are The Links of Forth, Blair Drummond and The Smith of Chilliechassie

This article is reproduced from the excellent pipingpress.com website which is run by Rab Wallace and is a great resource for all the latest news and views from the piping world.

"Turas Ceoil - Resume" : St.Laurence O'Toole Pipe Band at the Peak of their Powers

I think I know after nearly three hours of listening to them at close quarters what makes St Laurence O’Toole the band they are, writes the Editor. There is a spine of excellence running from the pipe major through their heartbeat, bass drummer John Dunne, to the admirable Creighton, D/Sgt. Stephen of that ilk. Pipe Major Alen Tully has a quiet command about him and Stephen homes in on every eyebrow fluctuation. John is just John, probably the best bass of the lot. Again, a keen eye on the P/M.

Underpinning all of this is the band’s sound. Accurate to a fault, full, projecting, thrilling. You run out of superlatives. I don’t think there was a waver at all during last night’s show and when an outside tenor started to misbehave out came the drone cork to do the necessary. This was promoter Glasgow Skye’s 24th Worlds Week concert and a major success for them and their main organiser Kurt Mackintosh. A great way for the Skye to celebrate their 50th Anniversary.

The evening began with a short film and voiceover restating the band’s ethos of excellence in performance, hard work, friendship. To that end there were clips of them enjoying themselves after contests. These really summed up what SLOT are all about. Yet for all their mastery and success (they are the current UK and Scottish Champions) the band struggles for proper recognition in its homeland. I remember Alen’s father, former P/M Terry, telling me in 2010 when they last won the Worlds that they hadn’t even been given a civic reception by Dublin’s mayor. Well we appreciate them. And at last night’s finale 2,000 plus people got to their feet to underline just that.

The concert was spilt into four quarters emphasising the band’s musical journey, a journey which paid homage to their founders, their history, their country’s rich musical store and their emergence at the top of the pile in the pipe band world. We were treated to music from every genre. It was delivered on stage in two sections of an hour each. There was nary a slip or dropped gracenote the whole time. I was only a few feet away from the fingers, so trust me. This band is full of brilliant pipers – 22 played. There ain’t no weak link. They exude a calm that comes from innate ability and serious endeavour. Some of them are very young. SLOT are future-proofed.

And as long as they have Steven Creighton driving them on they will be at the top of Grade 1 years without number. Not since watching the great Alex Duthart up close have I seen a percussionist living his music the way SLOT’s leading tip does. He’s there with the pipers on every nuance, every phrase ending, lifting the mono-dynamic of the pipes to another musical level. Wisely Stephen had positioned his corps behind a wall of perspex sound baffles and this killed the drum corps curse of Glasgow Royal Concert Hall, a curse which has taken the shine off many an otherwise enjoyable evening on the biggest night of Worlds Week. More than anything Stephen enjoys what he is doing and his beaming countenance was a feature of the concert.

He makes the perfect team with his Pipe Major, the quiet spoken Alen, a gifted piper in his own right. Another star of the evening was the compère, the humourously self-effacing Eric Stein from New York. Eric told a story of when visiting Alen when he was a boy of seven the youngster boasted of now knowing twenty pipe tunes. Asked to play one and expecting the Minstrel Boy the prodigy produced all six parts of Highland Wedding.

Everyone who left the auditorium last night was uplifted by St Laurence O’Toole’s music and the understated brilliance of its delivery. It is no surprise their shows are so popular and I am sure the recordings of Turas Ceoil will prove likewise. 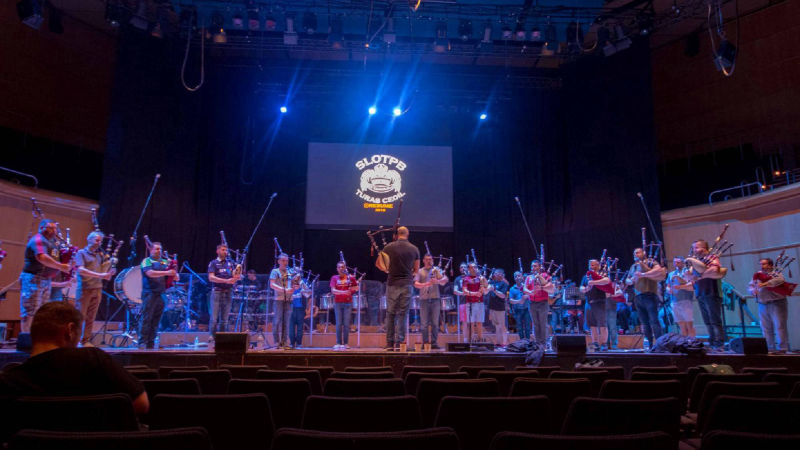 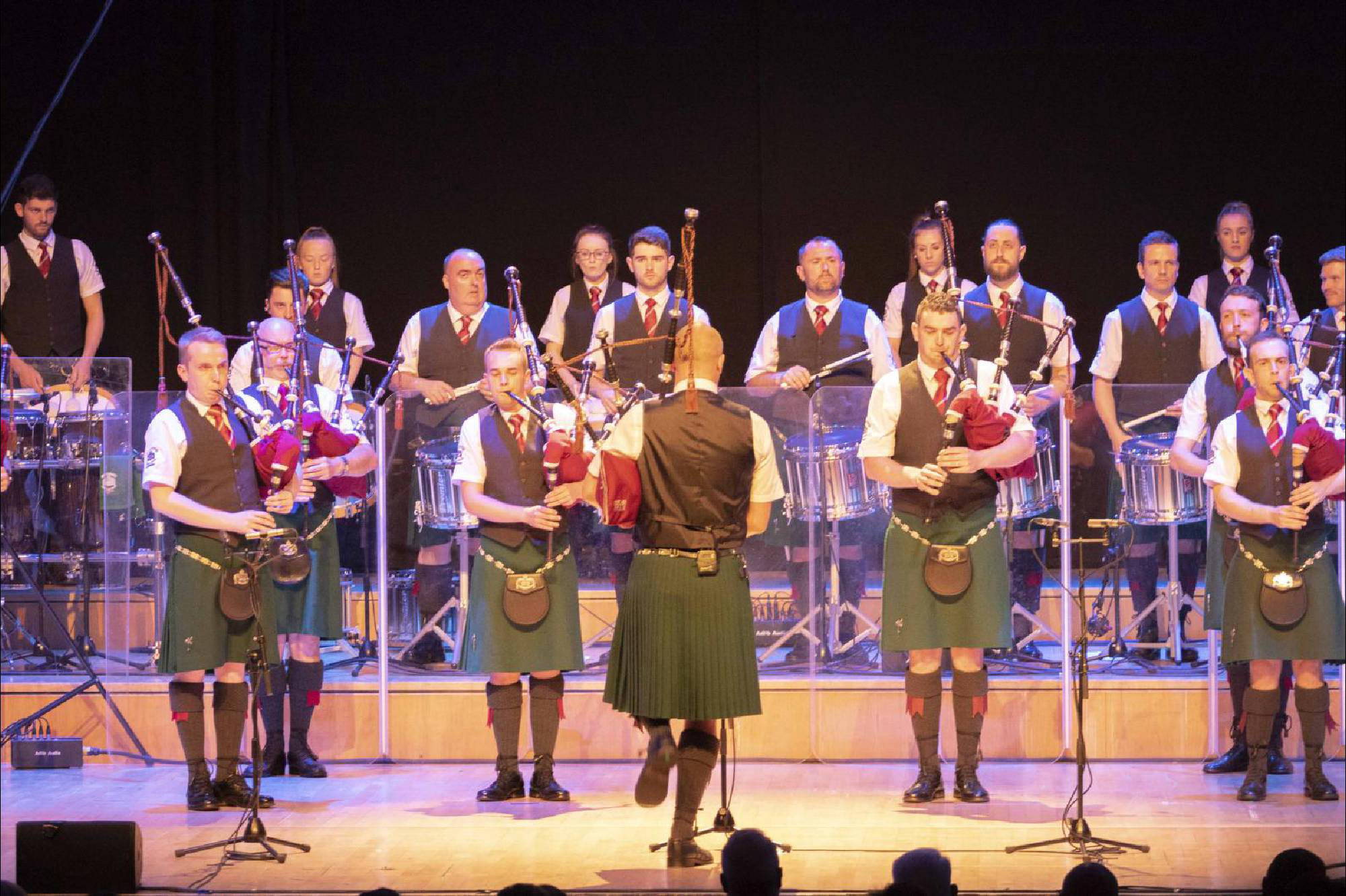 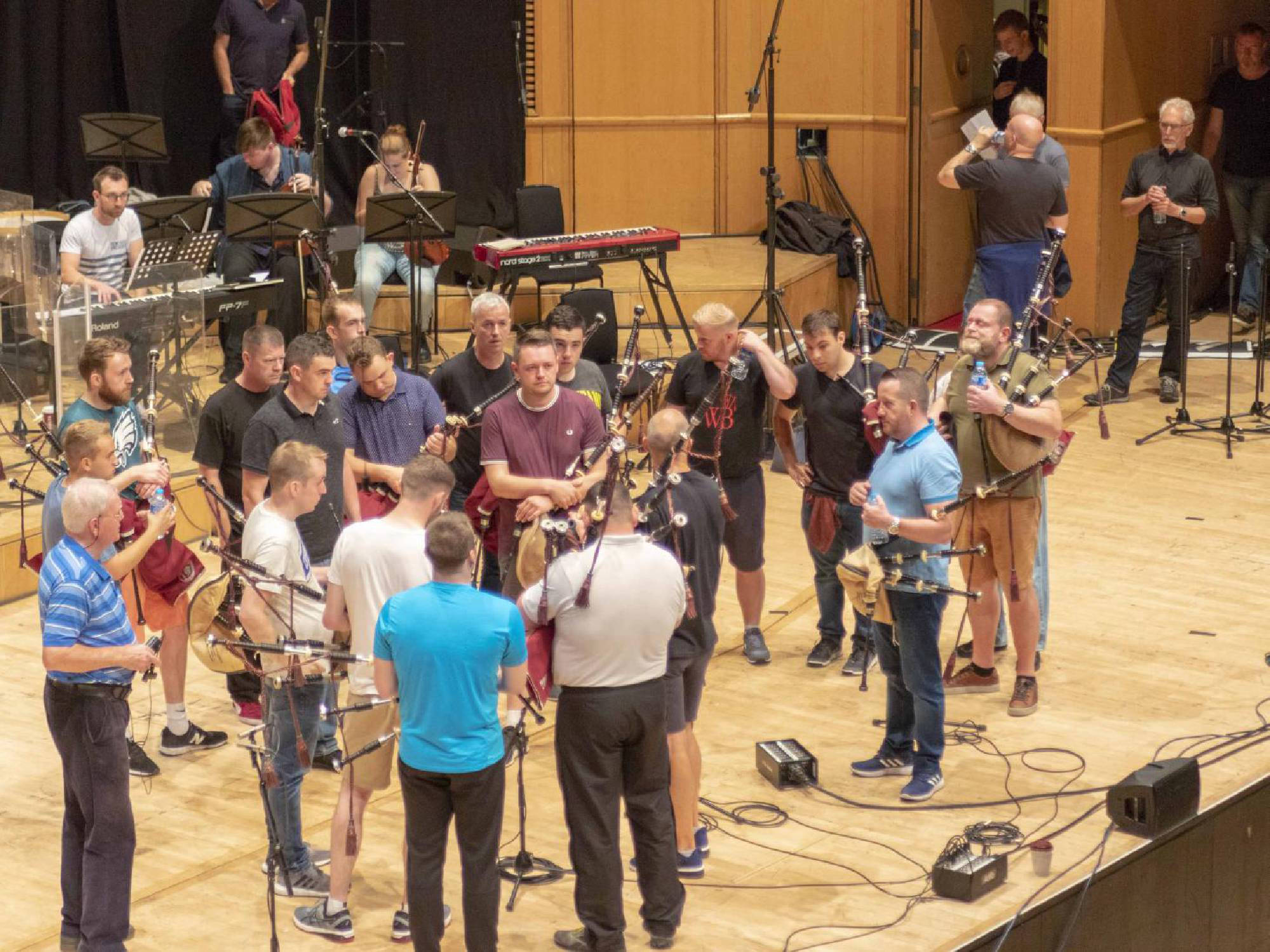 The O'Toole's won their second major title of the 2018 season in what could only be described as challenging conditions, with sun and alternating showers throughout the day............topped off with a a gale force wind as you entered the Grade One arena !

The band drew their number one MSR - Links of Forth, Blair Drummond and The Smith of Chilliechassie - emerging with a first and second in piping, a first in drumming and a fourth in ensemble which was enough to take the title overall by one point from Inverary & District.

Congratulations to Stephen and his corp on another major championship drumming title too.

Take a listen to the band's winning performance below........

St.Laurence O'Toole Pipe Band - MSR @ The All Scottish Championships 2018, Dumbarton.
Links of Forth, Blair Drummond and The Smith of Chilliechassie

The 73rd All Ireland Pipe Band Championship was close in the two-band Grade 1 event, but ultimately Field Marshal Montgomery of Belfast took its 25th title, based on lowest total ranking points across the two events.FMM won the Medley event with St.Laurence O’Toole taking the MSR after a tie was broken by David Brown’s ensemble mark.

Inveraray & District won the third major competition of the RSPBA season, the European Championships, held again in the north of Scotland at Forres, near Inverness. Weather was sunny and warm, and the multi-beer-tent verdant setting was its usual welcoming and friendly atmosphere, making it one of the most popular venues in the RSPBA season.

The Grade 1 prizes were announced around 7:15.

There were 15 in the Grade 1 event, but the Grade 2 competition was one of the smallest in decades, with only nine bands competing.

Only two weeks after the UK Championships at Belfast, several bands from Northern Ireland and Ireland elected to give the European a miss likely due to travel and accommodation costs. With the first major win of the 2018 season for the 2017 World Champion Inveraray & District, the contest marked the third different band to win a major championship this year, following the success of ScottishPower at the British Championships and St. Laurence O’Toole at the United Kingdom Championships.

Take a listen to the SLOT performance below - the band drew their Rainbow Medley selection.

St. Laurence O’Toole walked off winners of the 2018 United Kingdom Championships at Stormont, the second RSPBA major competition of the season.

This is the first major win for the band since the European Championships in 2016.

Just for reference, in the video of the band's performance below, the announcer left the microphone turned on - which resulted in the echo you can hear as we were marching into the circle .

Not ideal.....and the players(particularly the drummers) did extremely well to hold it together.﻿

Results from the first major of the season at St.James' Playing Fields,Paisley on what turned out to be a scorcher of a day.

Scroll down to listen to the band 's very impressive performance.